Discernment, Personal Growth, Relationship with God, When life is Hard

The Reward for Giving Your All – Is it worth it? 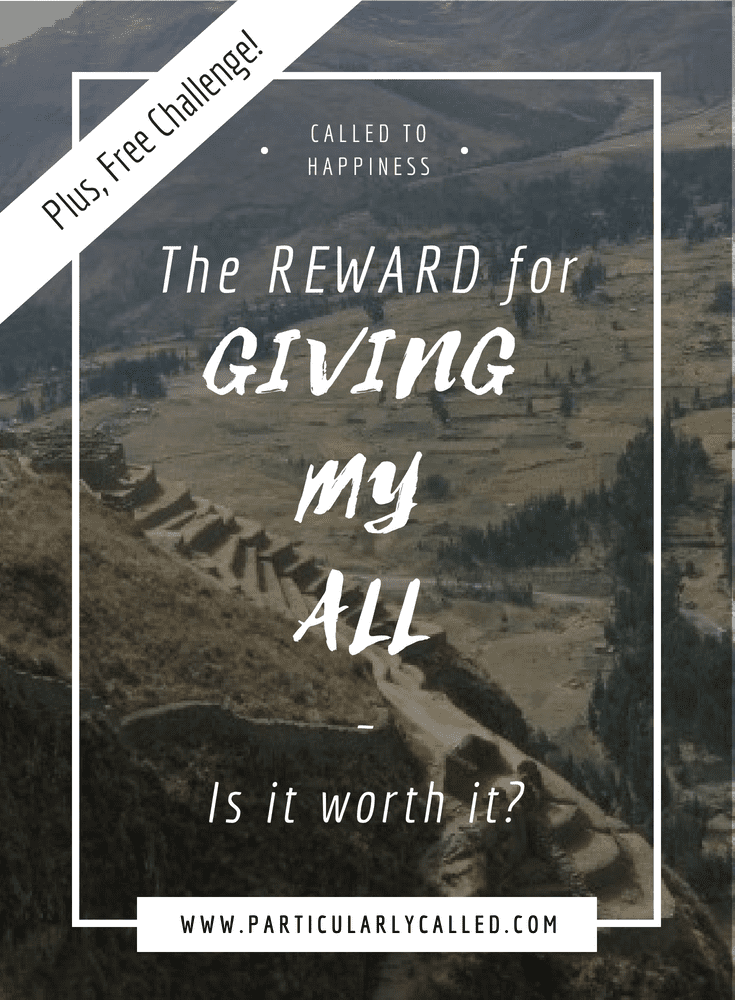 Do you ever find yourself worn out from trying so hard? Ever wonder if it is worth it to give your all? You are not alone! I say to myself at least 4 times a week (usually about parenting and houscleaning) “WHY DO I BOTHER???” For most things, giving your all is a depleting, energy sucking, soul crushing activity that almost always ends in futile defeat. We are simply not strong enough to meet our own expectations. But what if I told you that giving your all to a Relationship with God has exactly the opposite effect? Life-giving, energizing JOY, not to mention the actual strength we need to do everything else!

Our Souls long for God

If you are in a “Bad Place” with God you know the emptiness of a life without Him.

Sometimes, it is harder still to explain the longing that remains in our hearts even when we are in a “good place” with God.

Like the Rich Young Man, many of us can say “All these things [commandments] I have kept from my youth” (Mark 10:20) But, if that were truly enough, why was the Rich Young Man still unsatisfied? Why would he have sought out the Lord? Why did he keep asking for more? Why didn’t he have peace?

Because, deep down, we all know that just being “good” isn’t good enough!

If you are truly seeking the fullness of an infinte God in your life, then there is no limit to how far you can go, how deep you can go, how intimate you can be with Him.

Called to give EVERYTHING

Doing what is easy and pleasing to ourselves but remaining in our comfort zone, doesn’t make us great, it just placates our conscience. Doing what we like and what is easy doesn’t cost us anything and just helps us make excuses not to do more.  But, God didn’t ask for what was comfortable or easy.  He asked for EVERYTHING!

Everything is much harder to give. Everything makes us nervous.

But, we are not meant to worry.

“Therefore I tell you, do not worry about your life, what you will eat [or drink], or about your body, what you will wear. Is not life more than food and the body more than clothing? Look at the birds in the sky; they do not sow or reap, they gather nothing into barns, yet your heavenly Father feeds them. Are not you more important than they? Can any of you by worrying add a single moment to your life-span? Why are you anxious about clothes? Learn from the way the wild flowers grow. They do not work or spin. But I tell you that not even Solomon in all his splendor was clothed like one of them. If God so clothes the grass of the field, which grows today and is thrown into the oven tomorrow, will he not much more provide for you, O you of little faith? So do not worry and say, ‘What are we to eat?’ or ‘What are we to drink?’ or ‘What are we to wear?’ All these things the pagans seek. Your heavenly Father knows that you need them all. But seek first the kingdom [of God] and his righteousness, and all these things will be given you besides. Do not worry about tomorrow; tomorrow will take care of itself. (Matthew 6:25-34)

What does God ask of us?

He asked us to Love the Lord our God with our WHOLE heart, WHOLE soul, WHOLE mind, and WHOLE strength (Matthew 22:37).

He told the Rich Young Man that the only thing he was missing was to sell ALL his possessions, give them to the poor and come and FOLLOW HIM. (Mark 10:21)

In the parable, the man had to sell everything he had in order to buy the field where he had found buried treasure (Matthew 13:44).

He called his disciples to come after him and they left everything to follow Him (nets, boats, family, livelihood, etc) (Mark 1:18, Luke 5:28, Matthew 4:18) (Peter was even married! – we’ll come back to that in a second!)

Following God requires action, it requires self sacrifice, it means going above and beyond what we think is logical or “enough”. 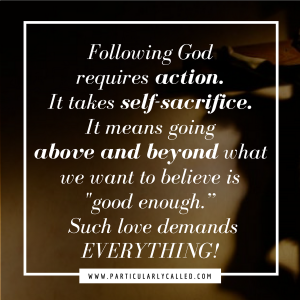 The enemy is the one who convinces us that “enough” is enough.

What did he try to tell Christ in the Garden – “You’re just a man, can you really do this?”

What did he tell Him in the desert, “You are God. You already deserve all this honor, recognition, glory etc. Why not just get it the easy way?”

What did he tell Adam and Eve in the garden.  “How bad could it be to eat this fruit?  God’s just holding out on you something that you deserve”

What does He tell us:

This little bit you are doing is good enough.

You are a good person, why should you have to do anything else?

Why should you DO anything differently with your life as long as you go to church on Sunday and sing lots of praise and worship music?

Why should you be the one who has to give more when nobody else is?

It’s really not so bad as long as you are a good person for the most part.

What is this doing to us?

It is lulling us into complacency.  It is making it so that we drown out the voice of God asking us to give more, do more, love more.

This is My commandment, that you love one another as I have loved you. Greater love has no one than this, that He lay down his life for his friends. You are My friends if you do what I command you.… – John 15:12-14 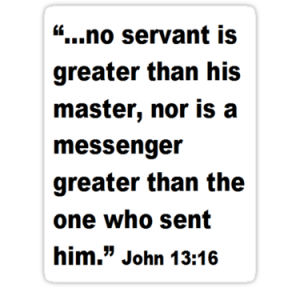 What was His example???

His example was TOTAL faith:

His example was TOTAL obedience:

His Example was TOTAL self giving:

His example was TOTAL forgiveness:

Then Peter approaching asked him, “Lord, if my brother sins against me, how often must I forgive him? As many as seven times?” Jesus answered, “I say to you, not seven times but seventy-seven times.” – Matthew 18:21-22

His example was TOTAL endurance to the end:

His example was EVERYTHING!!!! 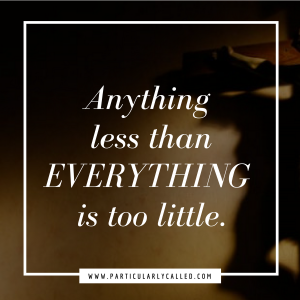 What must we do then?

We must seek Him with ABANDON, with RECKLESSNESS – as He seeks us (Reckless Love)

We must prioritize HIM above EVERYTHING.

He is the reason we are alive, thus, we must LIVE for Him alone.

Yes, but we aren’t alone, nor are we first.

Sometimes we make the excuse of it not being FAIR that we have to “move first” or be the “ONLY one” who is living this way.  But, this too is believing a lie.

He came first, not to show that He was above us or better than us, but to be the same as us and show us by example how to live and the extent to which we must love. 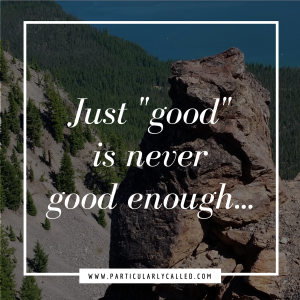 Is there any reward for giving your all?

Think about the man who sold everything he had to buy the field that contained the buried treasure. When He bought the field, he didn’t just get the treasure, He got the field too! Granted, the field wasn’t his goal, but that doesn’t mean he didn’t get it.  He is still a landowner, he still has a field which he can plant and use to feed His family.  His possessions aren’t exactly the same, but he didn’t lose much, especially since he also gained the treasure he sought! 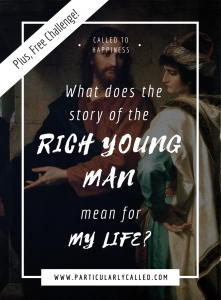 On the other hand,

look at the rich young man… He was “good”.  He gave “enough” but he was unfulfilled… He knew he needed more, that He was missing something. He knew that “enough” wasn’t truly enough, but he couldn’t explain it… Thus, he sought out God.

Good Teacher, what must I do to inherit eternal life?

You lack one thing: go, sell all that you have… and come, follow me.

Jesus asked him to sell everything for that which surpassed all else, but the young man went away sad.  Unfulfilled. Unchanged.  Unable to trust that what he was being offered as a treasure greater than that which he “already possessed”.

When we give, He gives back

Remember the popular saying: If you love someone let them go, if they come back to you they were always yours to begin with?

It is similar with God.

If you love something, offer it to God. If He gives it back to you, you were always meant to have it. (If not, trust Him.)

We have to give up EVERYTHING to follow Him and see what He gives back to us in return.

What He gives back is what we always should have had from the beginning anyway, except now we don’t see it as something we are entitled to, but rather as a gift. This way we can experience it with greater joy and gratitude.

He knows what you Need

God doesn’t ever truly ask us to give up the things that are truly good for us. He only asks us to be WILLING to let go of them, to truly put Him above all else as the priority in our lives.

So, how do you grow in this area?

My grace is sufficient for you, for power is made perfect in weakness. – 2 Corinthians 12:9 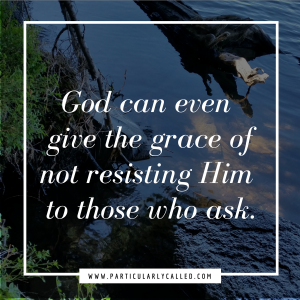 Read Also: How to know if Following God’s Will will make You Happy 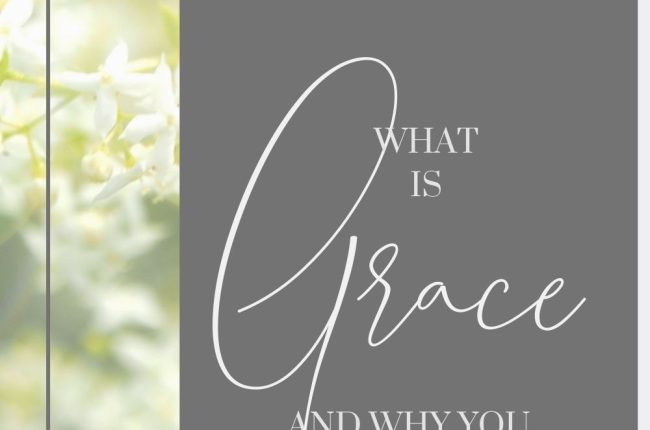 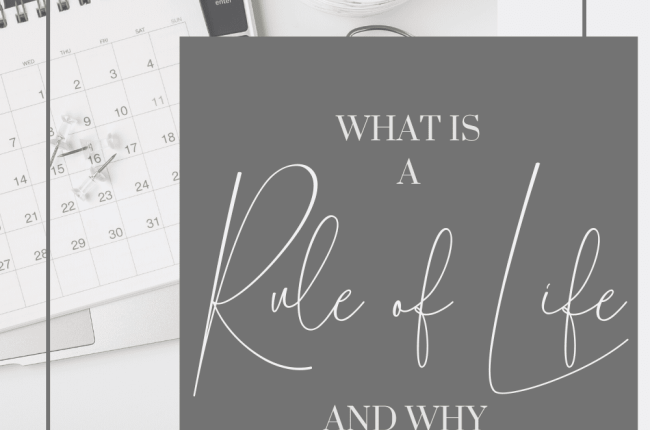 What is a Rule of Life & Why You Need One! 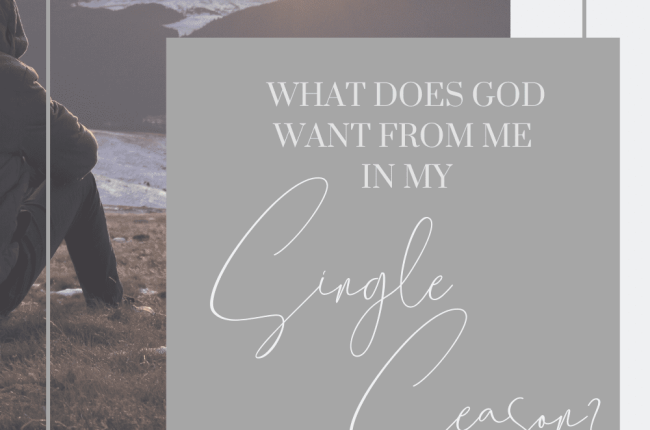 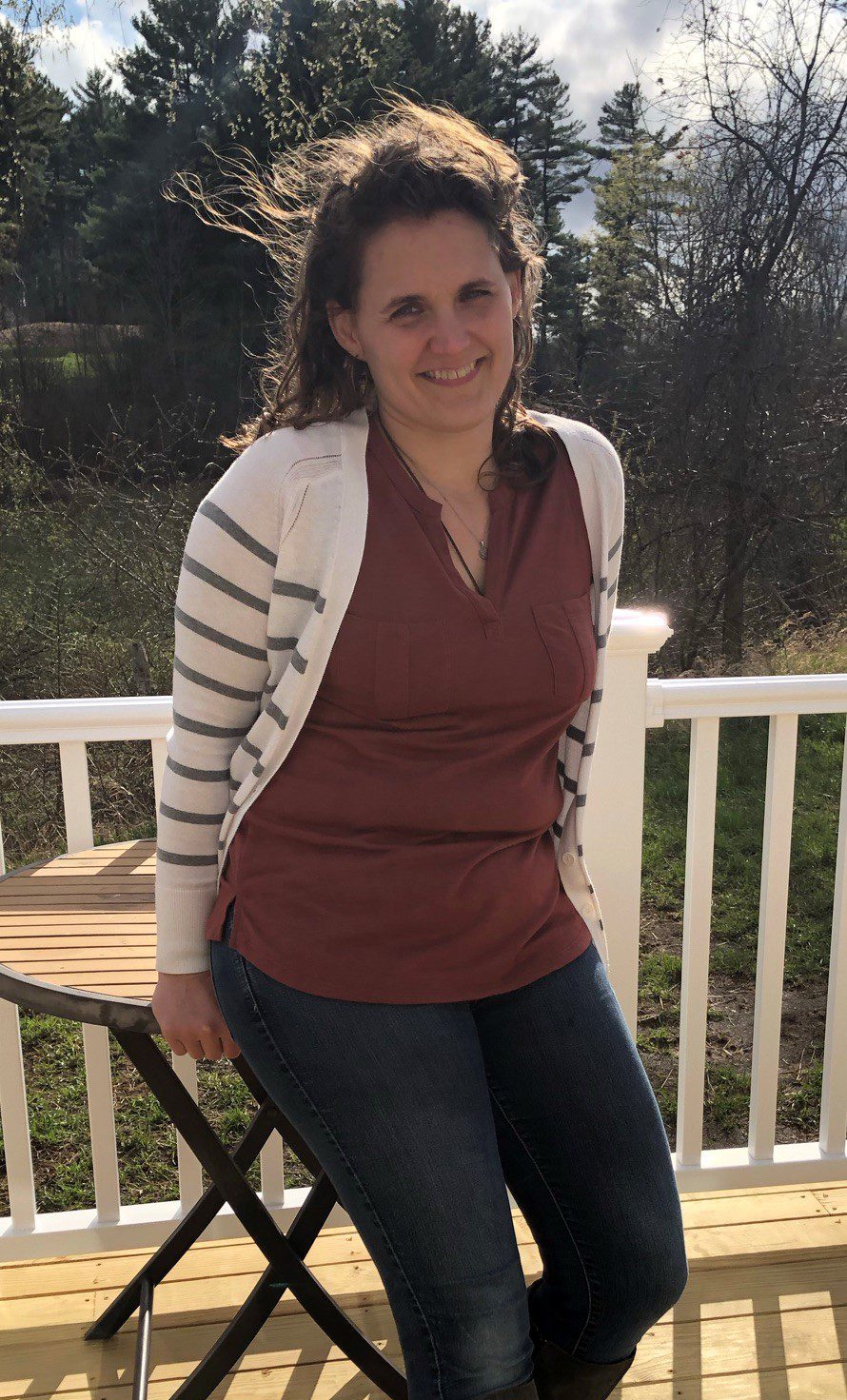