The Role of Religion in the Battle for Your Soul 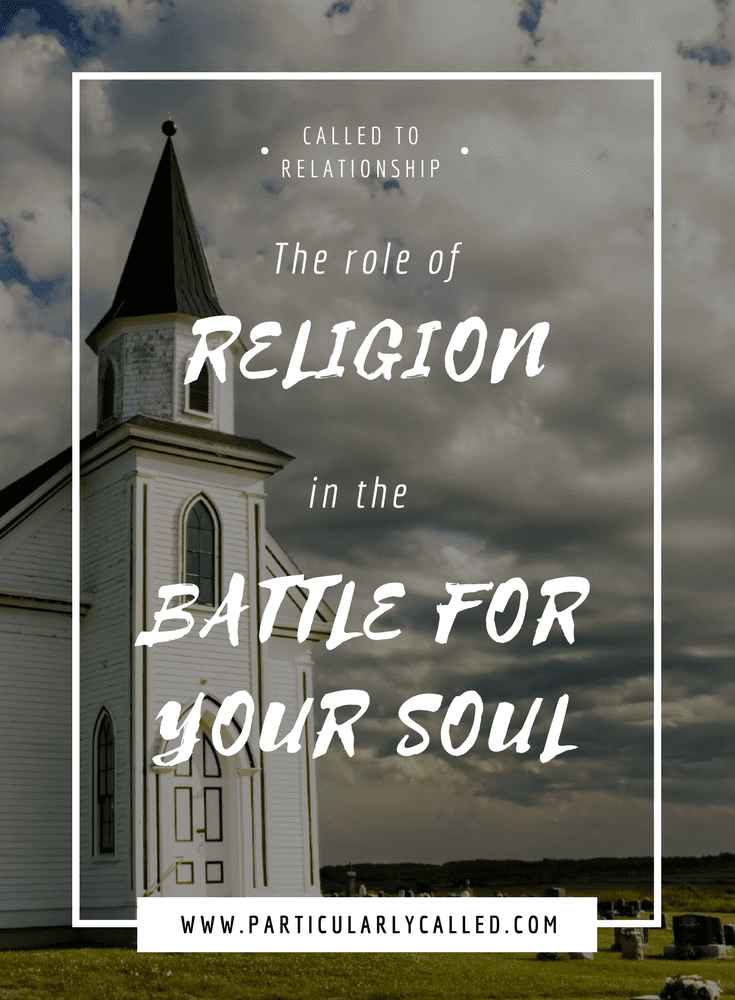 Religion is clearly important as it claims to answer the deepest questions of each and every human heart – why are we here, what are we made for and where did we come from and where are we going.

But, I don’t need to say that it is also a hotly debated topic.

What is the Role of Religion??

Religion has almost always been the source of great and painful divisions and feuds. In many cases, it has become distorted by the fallen people involved in it to use its power as a political tool, a money making venture, or an excuse for ostentatiousness.  It has been used as a tool for the justification of “better than thou” attitudes and a source of comparison and judgementalism.

On the opposite extreme, by the relativists, it has been seen as completely irrelevant, worthless and, at best, a matter of personal taste (namely, no matter what their differences in philosophy or theology, each religion is “as good as any other”).

Religion has been and continues to be misused, misconstrued, mishandled, and painfully misinterpreted for thousands of generations. Unfortunately these problems will probably continue into eternity, but does that make them acceptable??? Is this what Our Lord wanted? Is this what He came for? Died for? Lives for?

You are Peter and upon this rock I will build my Church – Matthew 16:18

Religion was important to Christ

He was a dutiful and practicing Jew. He knew the laws, the covenants, and the precepts. He knew the scriptures. He celebrated the Passover and the feasts. He was presented, baptized, and attended, and spoke at, the temple gatherings.

“beginning with Moses and all the prophets, He interpreted to them what referred to him in all the scriptures.” – Luke 24:27

But, He too was frustrated by the hypocrisy found there.

It is ok, right even, to be frustrated with hypocrisy in Religion. But, the hypocrisy of individual christians does not make Christianity wrong – any more than the hypocrisy of the scribes and pharisees made Judaism wrong in the eyes of Christ.

They tie up heavy burdens [hard to carry] and lay them on people’s shoulders, but they will not lift a finger to move them. – Matthew 23:4

“Woe to you, scribes and Pharisees, you hypocrites. You are like whitewashed tombs, which appear beautiful on the outside, but inside are full of dead men’s bones…” – Matthew 23:27

[After curing on the sabbath, they complained at Him] he said to them, “Who among you, if your son or ox falls into a cistern, would not immediately pull him out on the sabbath day? – Luke 14:5

The role of religion

Thus, the role of religion is not meant to bring us justification or some kind of “holier” status than everyone else, but, rather, to help us foster an intimate relationship with God

Anything then, that does not have as its end goal a deeper, more profound, more intimate, more intense relationship with God and each other (love thy neighbor) is simply distracting from it.

Does this mean money does not play a key role?

We see the disciples selling all they have to live in common and support each other, giving to the poor, providing for the less fortunate

All who believed were together and had all things in common; they would sell their property and possessions and divide them among all according to each one’s need. (Acts 2:44)

We see the acclamation of the widow who gave the last of her livelihood. (Luke 21:1-4)

But, this is a view of money for generosity, livelihood and survival – never for personal gain.

Christ does approve of some lavishness when it comes to his glory and a sign of our love for him (ex. the woman who washed his feet with costly perfume – John 12:4-8) but never for any other reason.

In fact, we see the opposite.

Even in the temple, where the people were there dealing with money on temple business (but profiting from it), He threw them out and accused them of making His father’s house a den of thieves (Matthew 21:13, Luke 19:46, Mark 11:17)

Unless I am mistaken, the only significant thing Christ ever said about politics was:

Put simply and without going into unrelated theological treatises, respect politics but don’t let it get in the way of your relationship with God. They are separate and should both be respected –  as long as politics does not impede our giving to God what is God’s. God is always first.

Christ’s vision of religion – why did He found a Church?

Just think about those he chose to guide His church. It wasn’t just anybody, it was those closest to Him. It was His friends, His eyewittensses. It was those who could vouch for Him and share this closeness to Him with conviction, fervor and joy.

Jesus performed many other signs in the presence of his disciples, which are not recorded in this book. But these are written that you may believe that Jesus is the Messiah, the Son of God, and that by believing you may have life in his name…. It is this disciple who testifies to these things and has written them, and we know that his testimony is true. – John 20:30-31, 21:24)

Also, immediately following the Great Commission (sending out of His closest friends to spread His message):

The Lord established His church to help us all to love and live in communion with each other as we are called to do.

This is how all will know that you are my disciples, if you have love for one another. – John 13:35

I tell you, you are Peter and on this rock I will build my church – Matthew 16:18 (they needed a head to keep them united)

As a body is one though it has many parts, and all the parts of the body, though many, are one body, so also Christ. For in one Spirit we were all baptized into one body, whether Jews or Greeks, slaves or free persons, and we were all given to drink of one Spirit.- 1 Corinthians 12:12

3. Living God’s law (“The law and the prophets depends on the first two commandments”)

He wanted us to know that law is still important and we must live it. The church is now only there to help us do so!

Then Jesus approached and said to them, “All power in heaven and on earth has been given to me. Go, therefore, and make disciples of all nations, baptizing them in the name of the Father, and of the Son, and of the holy Spirit, teaching them to observe all that I have commanded you. – Matthew 28:18-20

If you love me, you will keep my commandments. – John 14:15 (Referring to the 10 commandments (see the story of the Rich Young Man), as well as the 2 “Greatest commandments”)

How the enemy uses religion

Complete distortion, the opposite of God’s view of religion, while looking innocent

Beware of false prophets, who come to you in sheep’s clothing, but underneath are ravenous wolves. – Matthew 7:15

The enemy’s favorite tactic is to twist truth just enough so that it still resembles truth but yet still leads us FURTHER AWAY from, instead of closer to, God’s original plan of intimacy and unity.

He actually likes that which resembles truth, because it means that good people are still likely to take the bait.

*Note that these 3 principles are exact opposite of the ones above:

1. Distraction / Leading us further from God

Encouraging people within religion to focus more on money, politics, people pleasing (Christ was not even remotely a people pleaser), etc than following Christ and His teachings.

Promoting “better than thou” philosophies, causing people to look down on others, self-justification in separation from what Christ established while still claiming unity with Him

Everything is fine as long as we live at least part of the law, part of Christ’s teachings…

No matter which path you take, we will all always end up in the same place.

But, competing “paths” come from such a place of division, competition and disunity – a place that is contrary to the very essence of God’s nature.

The Role of Religion in a relationship with God

Religion is important. Christ Himself established that.

However, for a religion then to be worth it’s salt, it must have an intimate, personal and strong relationship with God as its predecessor and end goal.

Imitation of Christ must be our only goal – willingness to follow Him, even to death with Him, like Him and for Him

Whoever wishes to come after me must deny himself, take up his cross, and follow me. – Matthew 16:24

Never judge a religion by the people in it

The devil likes to use this judgement as a way to prejudice people against religion.

People are weak and sinful creatures who do not always live well what they believe… this is especially true if what they profess is challenging to live.

Why do we seek Him?

Your journey to religion needs to be in a seeking of relationship with Christ.

There are many out there that can begin pointing in the right direction because most have good intentions, but there is always futher to go, always deeper, always more you can give until you are willing to shed your last drop of blood in pursuit of union with Christ.

Any religion that doesn’t challenge you out of your comfort zone in pursuit of Christ should be questioned.

What is your religion offering you??

My response – Am I truly seeking Him?

Or am I faithful to the cross?

Ask yourself today, do I want God because of what He can offer me? Or, am I seeking Him out because I want to offer Him all of me?

Not all paths may lead to the same destination, but, no matter where you start from, you can end in the right place. 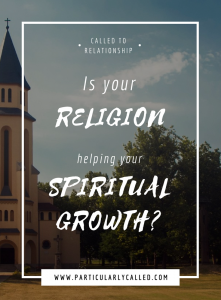 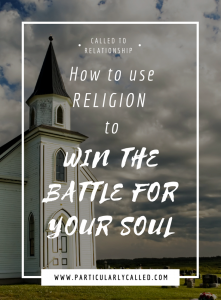