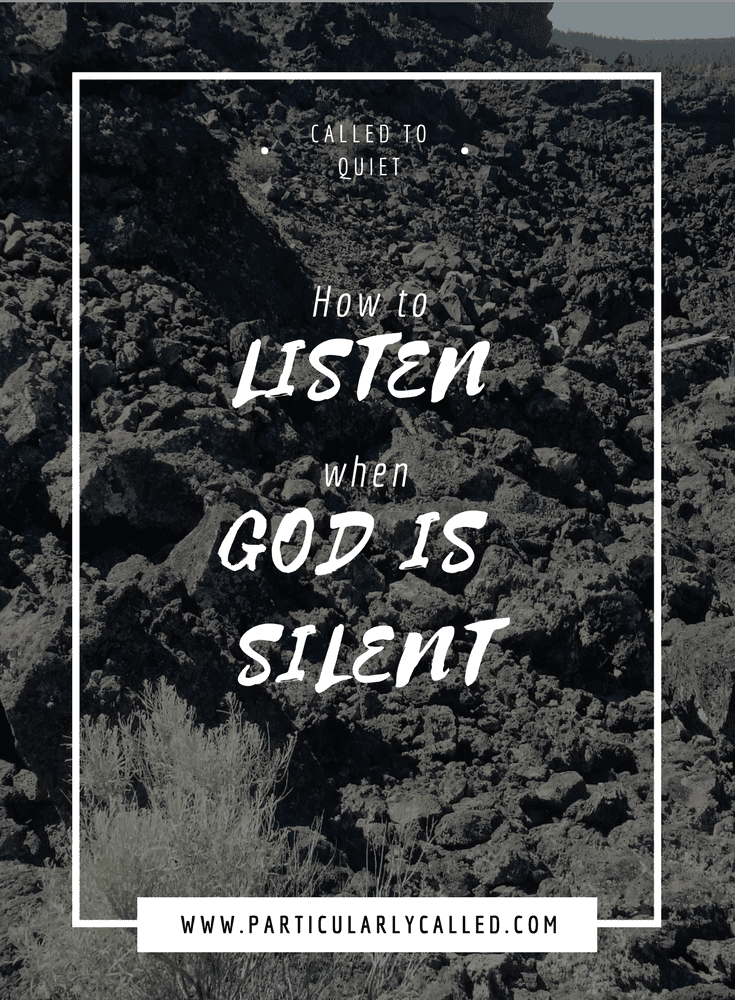 What are we supposed to think when God is silent? If He truly loved us wouldn’t He speak? We are seeking desperately for answers, for encouragement, for consolation… and yet we are met with quiet. Why? Did I do something wrong? Does He not love me? Does He not care? Is He even listening?

Some of our darkest moments happen when we feel far from God, or rather that He feels far from us.

A violent squall came up and waves were breaking over the boat, so that it was already filling up.  Jesus was in the stern, asleep on a cushion. They woke him and said to him, “Teacher, do you not care that we are perishing?” He woke up, rebuked the wind, and said to the sea, “Quiet! Be still!” The wind ceased and there was great calm. Then he asked them, “Why are you terrified? Do you not yet have faith?” They were filled with great awe and said to one another, “Who then is this whom even wind and sea obey?” – Mark 4:37-41

This passage is a beautiful one but so short and under described.

The storm must have been very great to be sinking the boat already. It is shocking that Jesus is still asleep in the first place.  Right there shows the unshakeability of His peace and trust in God.

If there is nothing to be afraid of, you can sleep even through storms. 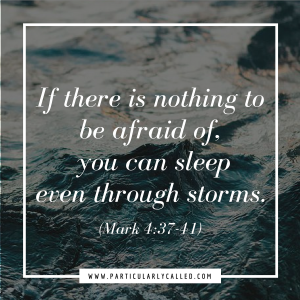 The disciple’s reaction was very human – Our Lord’s sleep seemed to speak to them of a certain level of apathy, rather than trust.

Do you not care that we are perishing!?

That is an accusation I make against Him far too often.

“Don’t you care about this problem? What are you doing about it? because it sure doesn’t feel like much!”

But Jesus loves His disciples and they can wake Him even when the storm seems unable to do so. He recognizes their situation and immediately resolves it… and, only then, addresses them.

What were you so afraid of? Don’t you trust me yet?

Instead of recognizing that they should have trusted Him, they were struck with amazement and completely disregarded His question entirely as if each and every miracle was a new opportunity to get to know their Master and Friend.

We all experience our “violent squalls”.  For me, the ones I notice most recurrent are not knowing and not understanding the whys and hows of all my seasons.

How often do you seek answers, often in tears, to questions you think you need to know the answer to RIGHT NOW and, yet, the answers seem to almost never come.

I remember back to when I was dating (or “not-dating”) my husband (then best friend.) I literally agonized for nearly three years years over whether or not I should even be talking to him. Whether or not is was a healthy to entertain such a close friendship with a man who ticked off so “few” of my “boxes”. I wanted answers as to why I was attracted to him and why I just couldn’t seem to really break things off. I wondered if I was damaging future prospects or if I was giving away too much of my heart…. And yet, despite my hesitations, the relationship kept getting deeper, which terrified me even more.

But, God didn’t seem to be giving me any clear answers or signs as to what I should do.

When I was starting college I wanted to know beforehand what major I should choose so as to be on the “right track” from the get go and not waste any time or money…. But He never spoke, so I changed my major twice, and even changed colleges two years in.

During college I wanted to know if I should consecrate my life entirely to Him or if I would be happier gallivanting off into a foreign sunset with my brown-eyed, dark-skinned, Spanish speaking dream. But, He seemed silent and I couldn’t decide, so I did neither.

And yet, in hindsight now I can see, He may not have been speaking audibly but He was still guiding me.  If I would have started out in the place where I finished college I never would have been able to get through debt free. Had I known what I was doing I never would have figured out that my true dream wasn’t Mexican.

Had He told me any of this when I asked, I would have thought He was crazy and I probably would have run away!

I still regularly want to know how seemingly impossible feats He seems to want me to accomplish are going to be come to fruition (ex. Running a blog with 6 small children – ages 6 and under, starting a homestead, simply paying the bills some days, etc) and I want to know everything NOW!

I think I need to know how so that I can “do my part”. But, I realize, even as I write sometimes, that I am already doing my part, I am just doing what I can when I can how I can and trusting Him to fill in all the blanks.

I have discovered something over my years of begging and pleading and searching:

we are on a “need to know” basis with God. 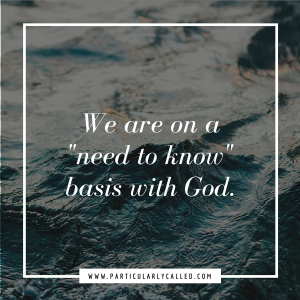 His plans are so great and often incomprehensible to us that if He told us everything when we ask, we might laugh at Him and reject Him altogether.

Do you think Mary might have hesitated a bit more if she had known Joseph would almost divorce her? That she would be riding a donkey to an inhospitable town during active labor?  That she would be forced to give birth totally alone in a freezing cold, stinky barn? That she would have to flee to Egypt in the middle of the night to live in a foreign land with a foreign language and no one she knew for an indefinite amount of time? That she would literally lose the Son of God for 3 whole days in a big city when He was just a child, and lose Him again to hatred and injustice, watching Him die in front of her eyes in the most bloody, cruel, and lengthy death in History?

If Mary had known all the details beforehand, wouldn’t it have made her decision harder?

And yet, even so, wasn’t her decision for the best? Do you think she ever regretted her decision? I doubt it.

Who are we to think we would be more “in the know” than the mother of God herself?!

If we aren’t prepared to receive certain information, He simply will not give it to us.

This is important to realize because often times we THINK we are ready. We THINK we need to know and need to know NOW, but when I think back –my 24 year old self would have been terrified of the prospect of having to do what my 33 year old self is doing. If God would have told me before where I would be today I would never have made it to the point where I am today. I was not ready.

I am not ready to know my own future or all of its particulars. 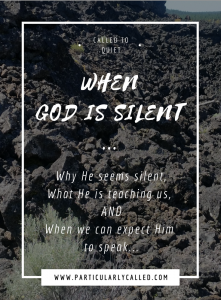 He went through life peaceful and like nothing could ever worry Him because of His implicit trust in God. he expected others (and Us to do this as well!) He always tested people’s faith before helping them – He insulted the Syrophoenician woman (Matthew 15:21-28) before helping her. One of His favorite phrases in almost all His miracles was, “Your faith has saved you!” He waited to calm the storm til the boat was already sinking (Mark 4:37-41). He waited til Peter was drowning before He stretched out His hand (Matthew 14:22-33).

In both cases He then rebuked them for their lack of Faith.

But His peace and strength went beyond other people’s faith as well. He was unshakable and unhurried. He stopped to heal people when he was on journeys like the destination never mattered as much as the moment (Luke 7:11-17). He stopped to talk to the hemorrhaging woman even when He was on His way to the bedside of a dying child, allowing her to die before he arrived (Mark 5). He waited til Lazarus was dead 4 days before coming to His rescue.

But for all of it there was a reason – a plan and a purpose.

Teaching us in Silence

He will not always remain silent

If and when we truly need to know, HE WILL SPEAK.  Guaranteed! 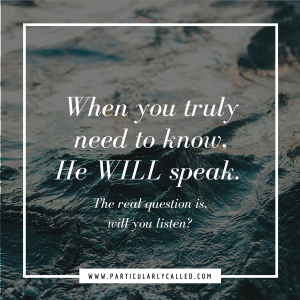 He WILL have pity on you – He knows what it feels like to experience God’s Silence – “My God, My God, Why have you abandoned me?”(Matthew 27:46)

God will NOT always remain silent as long as you remain patient and open. He may choose to act instead of speaking at times though, so be open to either option.

He WILL calm the storm, rescue you from drowning, bring your daughter back to life, etc – as long as you have faith and genuinely recognize your need.

He Waits for His Perfect Time

Remember how I said I agonized for 3 years over whether I should pursue a relationship with my now husband?  Well, that was during grad school and foreign travels, paying off debt and still very much growing up… but, as soon as I was finished with school and things leveled out a little, I knew without a shadow of a doubt and without the slightest hint of fear – even though I couldn’t explain it – and I have never looked back since.  We were married less than 3 months later. 🙂

We also agonized over our children’s names for at least 8.5 months of every pregnancy, but 1 or 2 days before labor we always knew without a shadow of a doubt.

This last minute timing seems to happen over and over.

It never ceases to exasperate us or try our patience, but it never fails either.

As long as we wait and trust, He will never let us down…

When can we COUNT on Him to speak?

What are things that we ALWAYS genuinely need to know?  These are the topics on which we can always know He will speak.

So, keep asking. Keep praying. Keep hoping. Keep trusting. Keep needing Him. Keep exercising patience. And most of all, keep listening – so that when He speaks you won’t miss His quiet voice.

Share a time below where God seemed silent until you truly needed to know… or how somehow it was better that He waited before speaking to you!

Are you too busy for God? 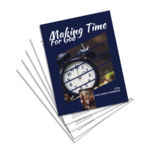 How bad is busyness anyway?

Hang out with Martha and Mary for a couple days and double check your priorities. Plus, make a practical plan to find balance between service and rest befitting your season!

Awesome! You are signed up! Now check your email to download the mini challenge workbook so you can get started!