The Binding Force of Lasting Relationships

A faithful friend is a sturdy shelter; he who finds one finds a treasure. – Sirach 6:14

Cute words for a coffee mug… but how often do we really find these lasting relationships in our cancel culture anymore?

I know I used to take friendship for granted. I loved everyone and it seemed that I was liked by those who knew me. Granted, I didn’t have a ton of close relationships but I always just assumed it was because I was busy all the time. I was grateful for my spouse, and naively assumed that everyone else had a similar experience with life.

Unfortunately, we can’t live in a bubble forever, and after many years of brushing off all evidence to the contrary, last year I watched what remained of all my rosy relationship fantasies slowly disappear like a breath in the frost…

Looking back on 2022 the inadvertent theme of my nearly constant contemplation was relationships. Or more specifically, the fragility of human relationships, the immense blessing it is to maintain the ones you have, and where the bond of lasting relationships really comes from.

This year, experiencing family drama and ideologically strained relationships generated enough pain to make even breathing hard at times. Watching friends’ marriages implode, and relationships I thought would be forever evaporate overnight over simple schedule changes reduced me to a huddled, tearstained mess more times than I can count. Aching for the parties involved, aching for my own loss.  More than once I found myself in stunned shock to discover that even professional friendly relationships can turn cold or even hostile over minor misunderstandings/miscommunications, and the increasing reality of having to be so painstakingly perfect and politically correct all the time in order not to “offend” people is beyond exhausting. 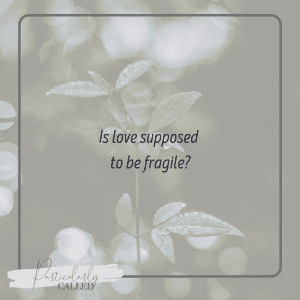 I am becoming acutely more aware of the fact that there may come a day when I experience relationship difficulties even with my own children. I wish it could be easier. I wish people weren’t so fragile. I wish love were still willing to make sacrifices, bear wrongs, and persevere (1 Corinthians 13:7). When did it become so self-centered and easily offended? When did it start giving up on people? When did it quit making the effort and going the extra mile? When did vows quit meaning “for better or for worse” until death?

I thought it was supposed to be different for Christians

But, aren’t we all supposed to be one body? (1 Corinthians 12) I thought, a kingdom divided against itself could not stand (Mark 3:25)?

This is what I learned…

Christ “brings division” because He unites everything only IN HIMSELF.

If someone doesn’t want to be part of the body – they can choose to cut themselves off from it (dang free will). If they choose to cut themselves off from Him, from grace, from the other members of the body, then they do… and there is nothing we can do about it. He has come to stir the world into flame (Luke 12:49), to cut down the fruitless branches, the ones no longer attached to the vine, and to throw them into the fire (John15:6). He has come to flip tables and throw the money changers out of the temple so that He can unite us in His body, only insofar as we actually ARE Christians (not just in name or face, but all the way down to the core of our hearts).

By this everyone will know that you are my disciples, if you LOVE one another. – John 13:35

It hates us, even in the name of God, for being different, for prioritizing God over bending over backward to fickle, fragile human relationships. It condemns us for refusing to idolize family (even though He says in no uncertain terms, “if you do not leave your family and come after me you are not worthy of me” – Luke 14:26, Matthew 10:37, John 12:25). It hates us for being so “insensitive” to everyone’s complaints, and for and our “obstinance” in our refusal to prioritize people over our state in life. But, honestly, its not even possible to make everybody happy! All this effort to keep everyone appeased in ancient times times this would be seen as offering incense to idols (ie. making sacrifices in order to appease anything/anyone we prioritize above God), and everyone’s expectations of being constantly catered to would be seen as whiney and dictatorial. It reminds me of stories of all the most despotic rulers like Herod, Nero, or Henry VIII where everyone had to go around praising them and bending to their will or else face certain execution.

What is happening to our society???

The Bond of Lasting Relationships

I’ve been surprised at the strength of the relationships I’ve found where both parties are pursuing God, where God is truly front and center, and where we have taken up the plow together (Luke 9:62). Unlikely connections with “nothing in common” become instant and deep friends, the minute we realize we are together on this journey. Suddenly, we are inseparable partners in the marathon race of life (2 Timothy 4:7), leaning on each other for strength in our weakness. Striving not to be more but to love more, to lean in more deeply together. Loneliness that I thought would be my life, surprisingly alleviated by someone else pursuing the same goal.

In this life, feelings fade, circumstances change, and people get hurt. “Love” as they all define it anymore doesn’t last. It evaporates into resentment as soon as we realize that nobody else is perfect, nor all available, nor all capable, and they can never fill the hole in my heart that was put there for perfection. The reason marriage rates have plummeted to next to nothing (except for all the unrealistic idealists out there, and the select few who understand this concept) is that so few believe that unconditional love is possible anymore. We’ve replaced it with a tentative combination of “tolerance” and self-care – and if we have enough of those then with any luck, if the tolerance doesn’t eventually run out and evaporate into resentment, then we have a marriage that “worked out”.

But, one can only tolerate so much, no matter how much self-care you do.

Nope, relationships don’t just work because people have hobbies in common, a mutual love of dogs, and some chemistry. 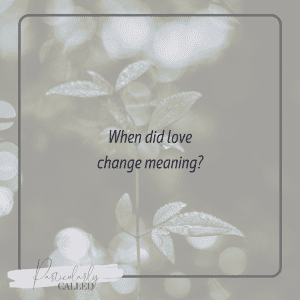 Relationships work because of teamwork, two people pursuing a common goal. Working together, sharing each other’s burdens, growing together, and making progress.  Such a relationship builds camaraderie (a force much stronger than the extra fluffy emotions that pass for “love” in today’s world), bonds the parties over something much stronger than feelings, and gives them a sense of purpose.

And people with purpose have motivation, direction, and an excitement about them – an inner vibrancy, an “aliveness” that doesn’t change with circumstances. They are attractive, joyful, and alluring.

This is where true, lasting, and holy friendship is born.

He is the center of Unity

Now, let’s look at that Sirach verse again with a bit more context – (ie. the part that doesn’t “fit” on mugs, t-shirts, and couch blankets). 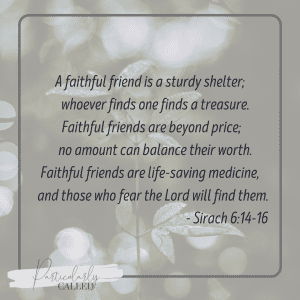 So here’s to a 2023 of real love, and stronger relationships

Here’s to the courage to forgive and bear wrongs patiently, and to surrender the ones that want to leave us without closing the door to them coming back.

Here’s to feeling the pain, living the grief, and letting it change us, letting it fuel in us the desire to flood this world with more REAL love.

This site uses Akismet to reduce spam. Learn how your comment data is processed.